On 22 of June 2017 (Thursday) at 12 pm, at the premises of “Holiday INN Hotel” in Skopje, the final conference “Cultural actions to advance municipalities – Sub-grantees within the project CIVIC PARTICIPATION FOR LOCAL DEMOCRACY supported by IPA2 Civil Society and Media Programme 2014-2015, organised by Foundation Open Society – Macedonia (FOSM) and Center for Local Democracy Development (CLDD) has been held.

The event was addressed by Nikola Bertolini, Head of Cooperation from the Delegation of the European Union, Robert Alagjozovski, Minister of Culture, Fani Karanfilova-Panovska, Executive Director of FOSM and Georgi Hristov, President of CLDD.

The project Civic Participation for Local Democracy is supported by EU and Foundation Open Society – Macedonia and Center for Local Democracy Development are partners in its implementation in the municipalities of Struga, Strumica and Centar. The project, which started with implementation in January 2016 and lasts until June 2017, is a complement to the joint activities within the framework of the Citizen-Centric Municipality Model which FOSM has been implemented since the beginning of 2014 in the aforementioned municipality. The budget of the project is 286,950 EUR.

The goal of the project is to help strengthen the Civil Society’s influence in the development of public cultural policies and decision-making at the local level, as well as to create an environment that encourages the activities of Civil Society Organisations to implement local cultural policies.

Within the project, among others, the Culture Strategies were prepared and adopted in all 3 municipalities and 9 civil society organisations (in the total amount of 84.720 EUR) were re-granted for strengthening their capacity and support of small innovative projects in the field of culture in order to implement the local Strategies.

The following projects were re-granted: 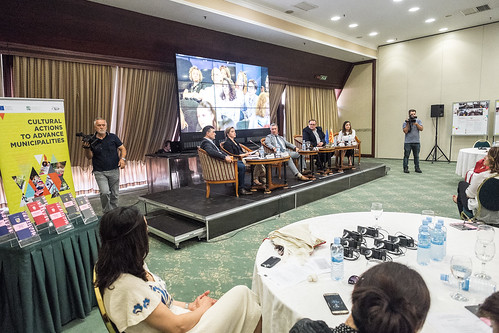